Nam Shubs
"This Snow Crash thing--is it a virus, a drug, or a religion?" Juanita shrugs. 'What's the difference?'" 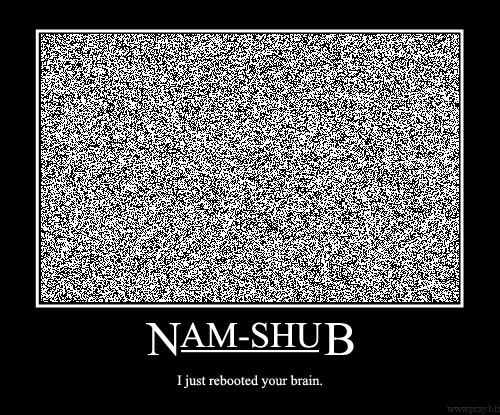 Nam Shub: An incantation, chant, poem, or speech thought to have magical power in Sumerian texts.

Have you ever had a song stuck in your head, a video, an image? All of these things are in a sense ideas that have gone 'viral'. They spread, infect, and multiply in the same manner as a virus. For examples you can consider anything from the spread of Communism, to religion, to any super popular video on YouTube. These viral ideas can be classified as 'Nam Shubs'. The Nam Shub was first spoke of in Ancient Sumerian culture as basically a form of programming for the human mind, brain washing if you will. The Nam Shubs of the past were much more total than todays YouTube videos. To contemplate the true implications of such a thing we go to science fiction, as we often do to supply plausible and acceptable scenarios to the seemingly farfetched. In Neal Stephenson's novel Snow Crash, he explores the full implications of the Nam Shub and what it could be used for.

History of the Nam Shub THE NAM SHUB OF ENKI

There was no wild dog, no wolf,

There was no fear, no terror,

Man had no rival.

In those days, the land Shubur-Hamazi,

Harmony-tongued Sumer, the great land of the me of prince ship,

Uri, the land having all that is appropriate,

The land Martu, resting in security,

The whole universe, the people well cared for,

To Enlil in one tongue gave speech.

Enki, the lord of abundance, whose commands are trustworthy,

The lord of wisdom, who scans the land,

The leader of the gods,

The lord of Eridu, endowed with wisdom,

Changed the speech in their mouths, put contention into it,

Into the speech of man that had been one.

The Nam Shub of Enki, derived from ancient Sumerian texts, basically says that at one time all of the lands, Shubur-Hamazi, Uri, Martu, and the whole universe was given speech of one tongue (language) by Enlil. This means that the whole of the world spoke one universal language, until Enki, lord of wisdom, abundance, Eridu, and leader of the gods, 'changed the speech in their mouths, put contention into it, the speech of man that HAD been one.' The change in verb tense shows that the speech of man is indeed, no longer one. Enki had devised a nam-shub so strong that it took away the universal language, erasing it from the minds of the world. This story closely resembles that of the Christian 'Tower of Babble' , that also describes all of the earth being of one language, until God decided otherwise, erasing the universal language, in effect causing the peoples of the land to begin speaking separate languages. This results in chaos and the decline of a large civilization that was working on great feats of architecture. In Snow Crash, a cyberpunk novel by Neal Stephenson, nam-shubs take the extreme shape found in the nam-shub of Enki as well as The Tower of Babble. Snow Crash is defined as a drug, a virus, and a religion. It can be better understood however as a nam-shub that spreads like a virus, with a 'high' similar to a drug, personality changes that include loss of one’s individual consciousness, that results in a cult like mentality, and lowers ones ability to reason against radical and illogical ideas such as found in Reverend Wayne's Pearly Gates. Furthermore, Snow Crash, like The Nam-Shub of Enki and The Tower of Babble, affects the linguistics of any infected, causing such things as speaking in tongues. To fully understand Snow Crash lets first consider how it is spread. Snow Crash is spread two ways. One way is through blood. Those infected by Snow Crash are forced to be 'blood donors' for a time after being infected. Their blood is harvested and exported to be used to infect others. Snow Crash can also be spread to hackers in a very specific manner through their fundamental understanding of binary code. This idea plays off the idea that there are fundamental structures inside our brain that are based off of language. Having access to these fundamental structures allows for total programming of the brain. Hackers are infected through the viewing of a certain series of binary code. This code to others, not having such a fundamental rooting in computer language, would appear as no more than a blur of ones and zeros. To a hacker however, the brain automatically interprets and absorbs the program. This is comparable to the access to a computers main frame through the bios. allowing for completely by passing any defenses.

In todays world there is no faster way to spread information or ideas than the internet. This is the world where todays nam-shubs thrive, reaching millions of users all over the world. Todays nam-shubs, though far from reprogramming peoples brains, and forcing them to forget a language, or invoking mind control in an instant, they do show many of the same characteristics. They can convey ideas, or portray any number of characteristics that compel massive numbers of people to watch them, and share them with friends. Todays nam shubs are mainly meme's and viral videos for those who don't know what these are, simply follow the links. Meme's are usually pictures or images that have, for whatever reason, taken on a viral like quality. Most meme's contain humor or irony.

Viral Videos are basically meme's in video form. They tend to be spread through sites such as YouTube. These videos are often music or humor related. Take a common phenomenon such as the song Gangnam Style. I have been walking through the mall when that song comes on, compelling majority of its listeners to pretend to ride invisible ponies as they do in the video. I must admit that personally the pull is nearly irresistible. One could almost imagine that their brains bios has been accessed.

876,738,831 views on YouTube In fact, Gangnam Style videos currently occupies 4 of the top 10 slots on YouTube when sorted by Most Views.

In conclusion, nam shubs exist all around us, infecting us with ideas, and shaping the way we think. They thrive on the multitude of eager internet users through sites such as YouTube. Although they do not completely reprogram us to speak another language, the ideas they portray are subconsciously stored and evaluated, effecting our actions and beliefs. So the next time you hear Gangnam Style and feel the need to hop around on an invisible pony, think quietly to yourself 'Why is this happening?', 'Is Gangnam Style silently reprogramming my brain?', and be aware of your mind, nam-shubs are everywhere.

Think about it on your own!

Music as a Nam Shub

After defining viral videos as a nam-shub, you cannot ignore the fact that the top 20 most veiwd videos on YouTube are music videos, or music related. How many times has a song been stuck in your head? You can try everything to make it go away but still it persists. Could music be a real life way of brain programming, bypassing defenses and situating its lyrics and ideas firmly in your mind.